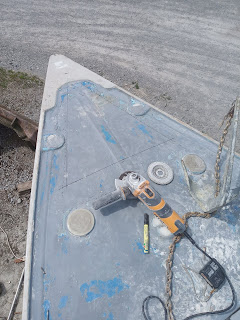 
Not having an anchor locker on Moonshine has always annoyed me. The options were feeding the chain into the hawse hole link by link, or else keeping the anchor and chain in a bucket in the stern locker. I wasn't happy with either, so now I'm taking the chance to give Moonshine a proper bow locker. I started by carefully measuring the anchor and then got the grinder out. 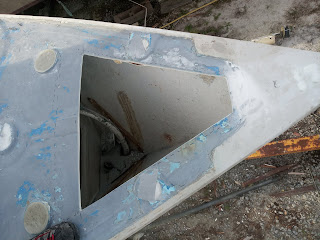 At this stage there was a brief moment of "oh no, what have I done!". 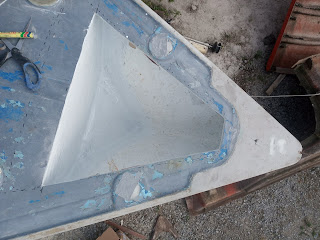 I made the wall and floor of the locker from 12mm plywood, encased in several layers of glass fibre. 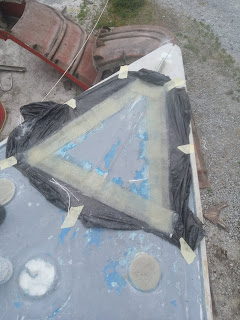 To make the locker lid, I took the section of deck that I had cut out and used bits of wood to hold it in position. I put black plastic on the deck to make sure the fiberglass wouldn't stick to it, and then laid up a thick flange around the outside of the lid. 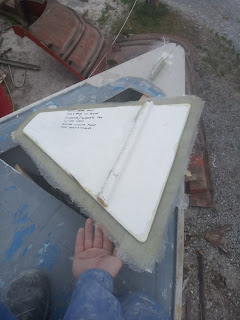 After popping the lid off the deck, here's what I was left with. A locker lid with a ragged fiberglass lid around it. 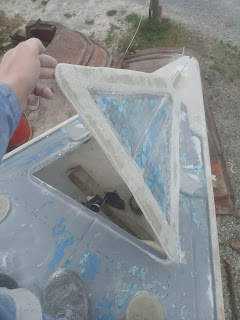 A bit of grinding later, and we're left with a pretty passable anchor locker hatch. 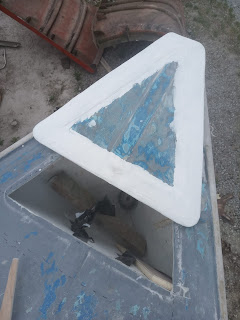 Add a bit of paint, some hinges and a latch and it'll be ready for action.

Now that the lockdown is loosening a little, I've finally been able to get back to work on Moonshine. And there really is a tonne of work to do! 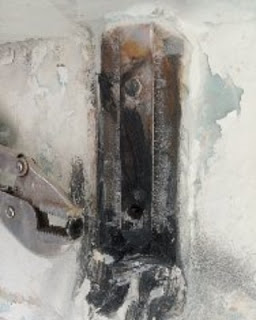 This is one of the more serious issues on the boat. All of the chain plates (the fittings that the wires supporting the mast connect to) are full of water, the wood is rotten and one of the bolts broke off in my hand. One of my priorities is to get these fixed, and do it in a way that makes them far stronger than they were before. I've got something unusual planned, stay tuned... 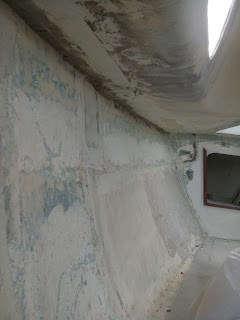 After stripping out the interior of the boat, this is what I was left with. The hull-deck joint was held together with self tapping screws, filler and prayers; and was broken in three places. I used polyester filler to create a small radius on the inside of the joint and then laminated over it with 1800g of woven glass fibre. 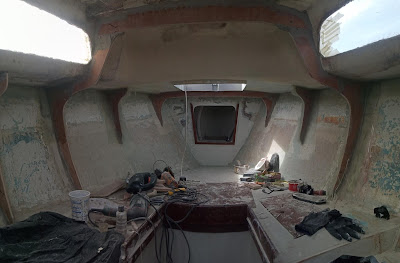 After glassing the hull-deck joint I started reinforcing everything. I've added ribs every couple of feet to support the joint and stiffen the hull. I've also added cross beams to support the deck under the mast base and under the tack point for the storm jib. 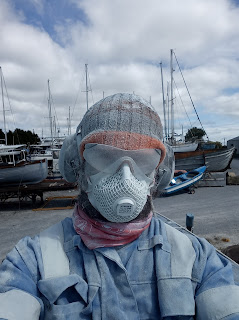 All of this is horribly dusty work!! I can't wait until I can move on to working on the outside of the boat!

When I was around fifteen or sixteen, I was massively into board surfing. I was making my own boards, and even managed to sell a few to make a bit of pocket money. At one stage I shaped a board, but then I think I ran out of glassing materials and got distracted by school and kayaking and whatever else was going on at the time. Whatever the reason was, the shaped foam blank got wrapped up in plastic, stored in my parent's attic and completely forgotten about for the intervening ten years or so. I haven't even thought about making another board since then, I blame kayaking for becoming all-consuming for a long time...

As of last week though, I had endless amounts of free time and a whole pile of glassing materials just waiting for the day I can restart work on Moonshine. It looks like my old blank is going to get it's day in the sunshine after all! The board is a 6'1 x 21'' x 2 3/4'' fish. The template is retro but the rocker, fins and bottom contours are more modern. I'm pretty happy with how it turned out, even if I wasn't expecting the red and black resin swirl on the bottom to end up looking this brown! There are some spots where the resin bled under the tape on the laps but I decided to call it character instead of hiding it with a pin line. 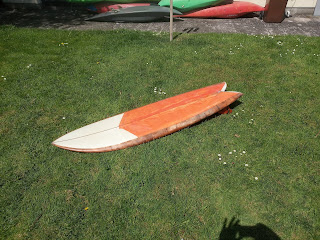 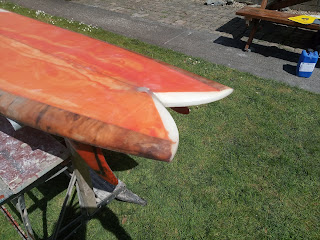 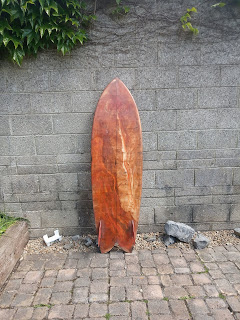 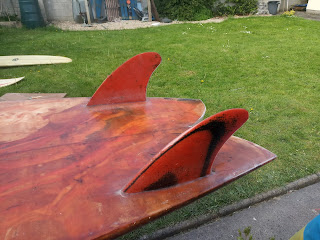 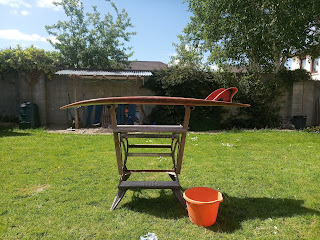 Not too bad, eh?! I REALLY can't wait to get out on the water and find out how she goes!!
Posted by EoinK at 10:49 PM No comments:

COVID Made Me Do It

I am aware that this is like sticking a big exhaust on a 1990s Nissan Micra and expecting it to look cool... 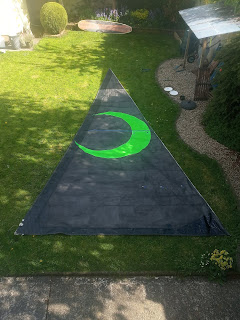 Genoa, complete with bright green crescent moon, Some might say it looks suspiciously like the moon on the Turkish flag but I promise the proportions are different! 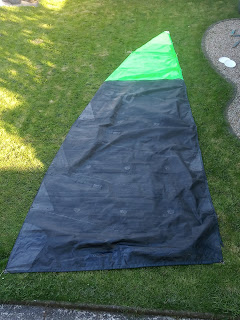 Mainsail, complete with a visibility patch so bright that my phone camera couldn't handle it! "I didn't see you" is definitely not going to be a valid excuse for a collision with Moonshine! Especially not when you see what I plan to do to the rest of the boat... 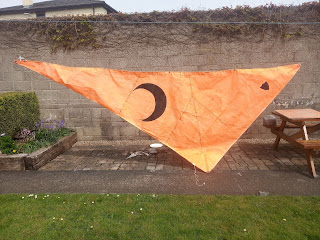 Storm jibs are meant to be bright, right?! This one started life white, which was never going to do. My plan is to run this as a staysail on a removable baby stay. It should add a little bit of power when reaching in light airs, reduce weather helm slightly, and look positively vomit inducing in between Moonshine's other black and green sails.

I know it won't be to everyone's taste, but all the fast boats have black sails, and white is so boring. And I had a hell of a lot of time on my hands! I'm actually quite a big fan of how it's turned out. The photos don't nearly do the results justice, those colours are BRIGHT!!

The paints and processes used for painting the sails of high end racing boats seems to be one of the internet's best kept secrets. I did some research and didn't find anything particularly useful. So I've used ordinary artists acrylic paints thinned to a more useful consistency with water. We'll see how they hold up, fingers crossed it doesn't just turn into a layer of black dust all over the decks mid way through the first tack...

So, just a quick post on the last couple of weeks of work. Since finishing the rudder modifications I've moved on to building a wind vane autopilot, which (if I can get it working well!) will be an absolute game changer for solo sailing on Moonshine. I have experimented with all sorts of sheet to tiller steering arrangements in the past and never had much success, so up until now my voyage length has been limited to how long I've been happy to sit at the tiller and steer for. Twenty hours or so has kind of been my limit, once it gets much longer than that my enthusiasm runs out and it stops being fun. For perspective, twenty to twenty four hours in Moonshine is the time it takes to get from Schull to Dingle, or Dingle to the Aran Islands. So in a few days it's possible to cover a good portion if the coast, but glued to the tiller apart from heaving-to in order to eat occasionally. Having a wind vane will allow me to stay at sea indefinitely and, crucially on a small boat with limited space for solar panels and batteries, won't use any electrical power. 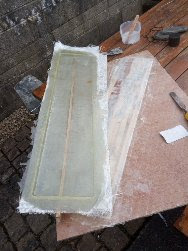 The vane of a wind-vane autopilot needs to be as light as possible, to allow it to react to the force of the wind acting on it. My intention is to mould it in fiberglass, so I built a plug from plywood in the shape of the finished vane to make the mould from. It didn't make sense to buy a whole thing of mould release wax for one part so on my first attempt I tried using car wax. No bueno, it stuck badly, and I had to break the mould to get it off the plug. I then tried covering the plug in sellotape, which actually seems to work quite well if you're happy to have some ridges from the edges of the sellotape in the finished part. 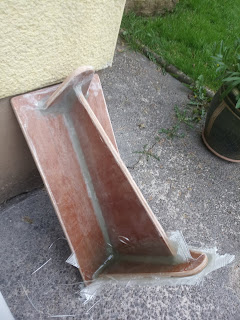 Here's the bracket which is going to mount the auxiliary rudder to the hull. The bottom end of this bracket is the part of the system that I'm most worried about being broken by the impact of a big wave at sea. So in the picture I've glued all of the bits together, added a fillet of thickened resin and I'm reinforcing it with a LOT of layers of fiberglass cloth. 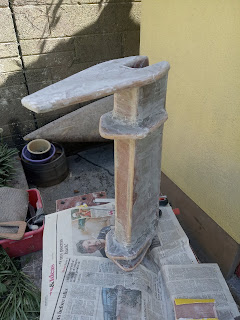 In between the auxiliary rudder and the bracket above is going to be this contraption. The auxiliary rudder will sit inside on a pivot which allows it to be lifted out of the water when not in use, while this thing itself sits on a regular pintle and gudgeon set up like any other transom hung rudder. The mini-tiller at the top is where the cables to the wind vane will attach, and will allow it to be used as an emergency steering system if there is any issue with the main rudder. 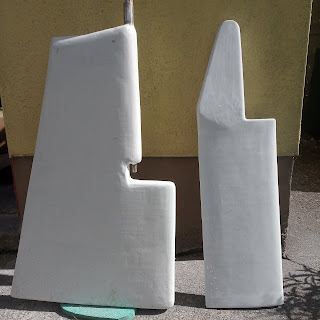 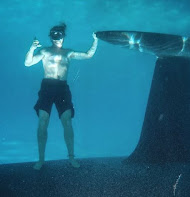